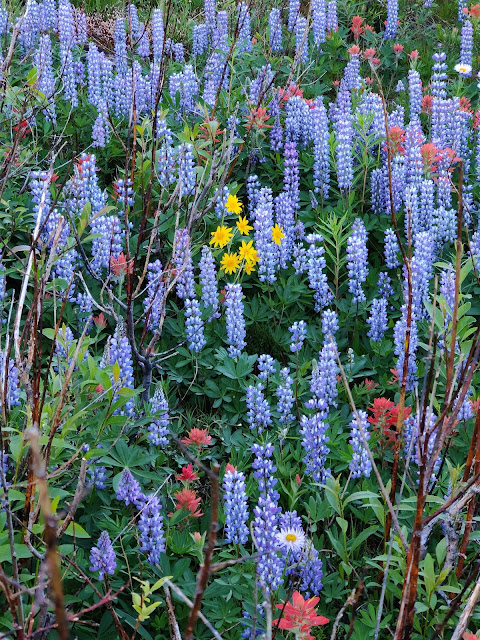 Eventually the trees became smaller and smaller until there were no trees and more sandy soil and granite as I ascended towards Windy Peak. The views just continued to get better and better the whole way up. I think it was at this point I sort of forgot about the Grizzly that was waiting in the woods to pummel me. 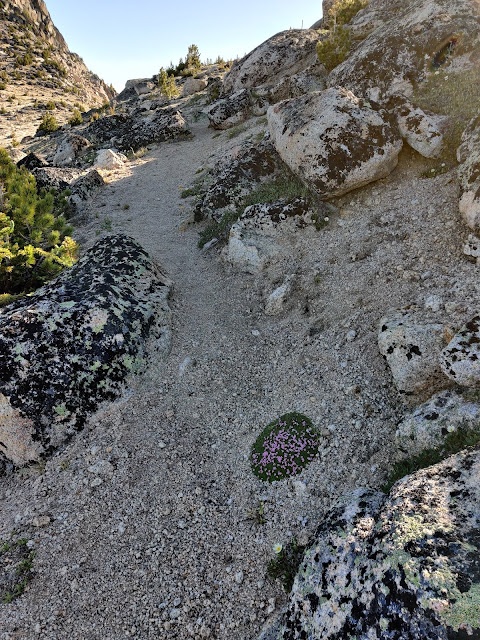 I climbed to the top of Windy and was immediately blown away by the scenery available all the way around. I remembered in the route description a note about "incredible 360 degree views" and the potential to linger here too long. The author was correct on both counts. 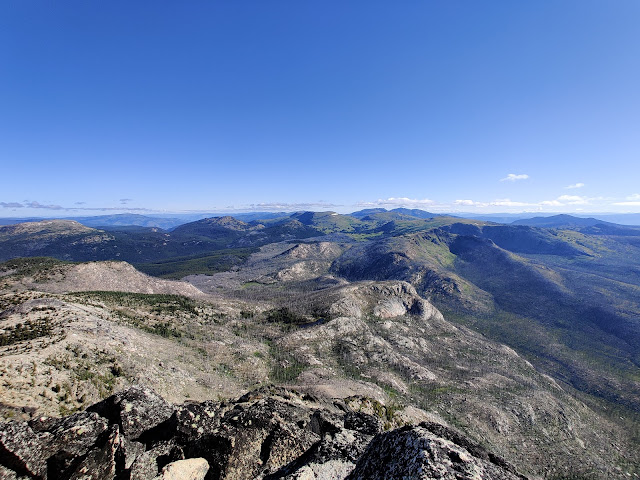 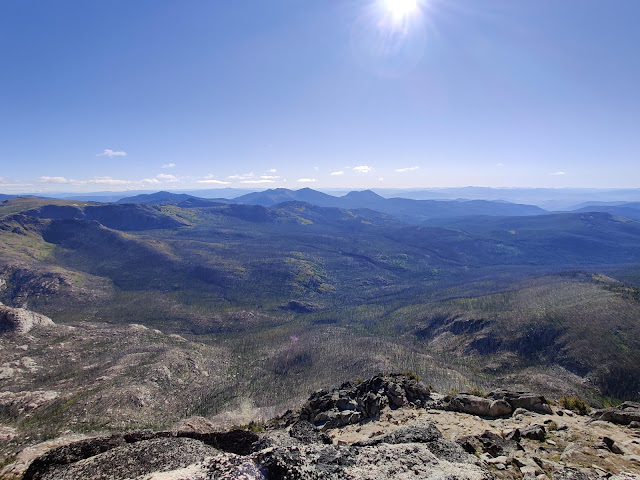 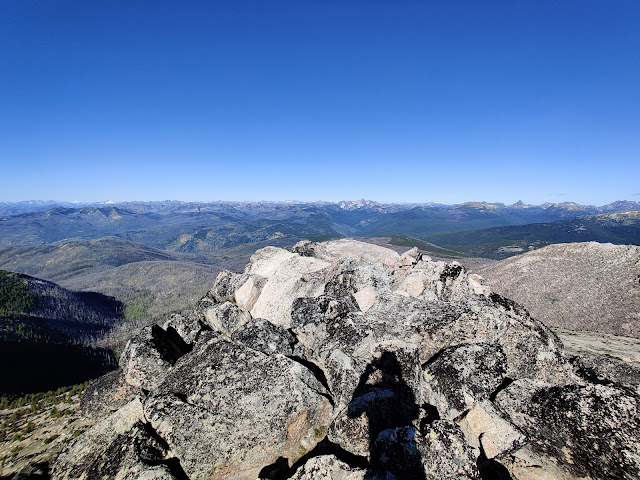 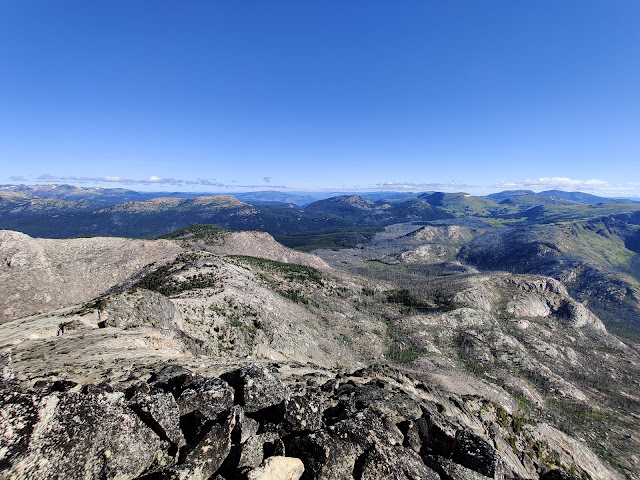 After eating a small breakfast consisting of two bars and a chia seed gel, and taking lots of pics of  course, I made my way back down from the top of Windy. I thought it was interesting the the trail was so easy to see from the top down, as I had felt like I couldn't see the trail at all on the way up and was mostly just climbing over rocks to the top in the general route from my 2016 Forest Service map layer. When I got the the bottom I and found the well marked sign for the spur trail, which clearly wasn't the way I had taken up, I realized I now needed to run back to the point where I exited the trail to ensure compliance with the rules of the route. This mistake only added about a half a mile to the adventure. Yay, bonus miles!
The next seven miles were definitely my favorite part of the whole run. The section between Windy Peak and Sunny Pass were mind-blowingly gorgeous. Sweeping views all around, grass and wildflowers everywhere, and lots of small streams. Just off of Windy in a large, flat, green area, I spotted three separate tents scattered around the high meadow and campers sipping coffee and relaxing. 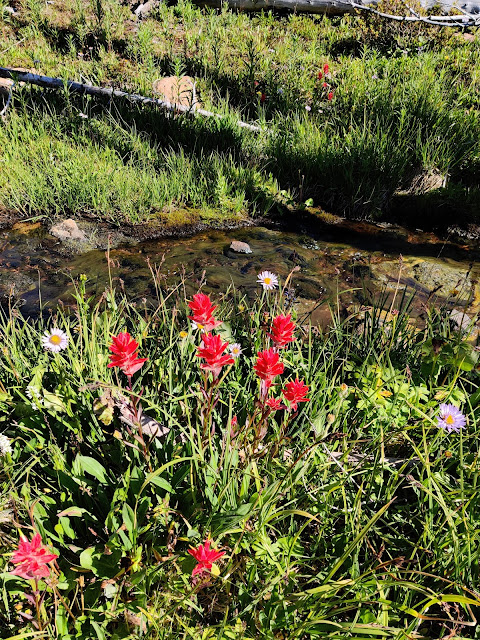 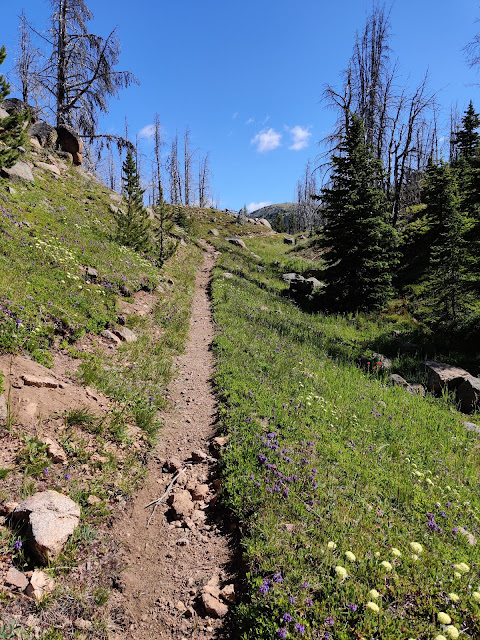 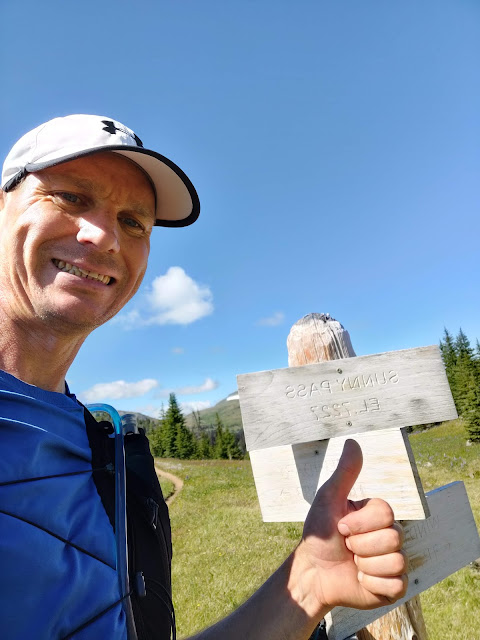 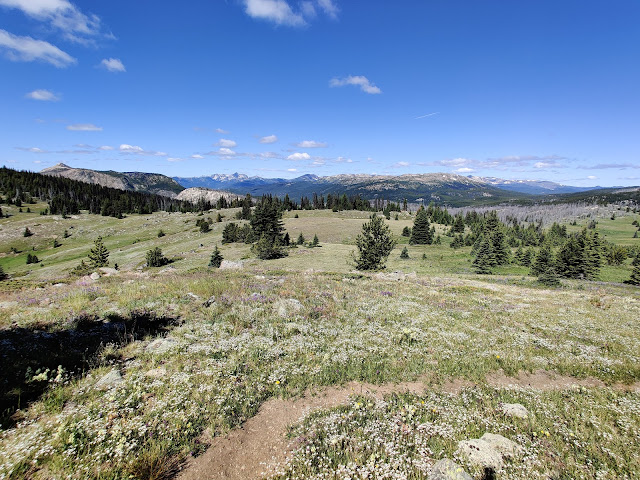 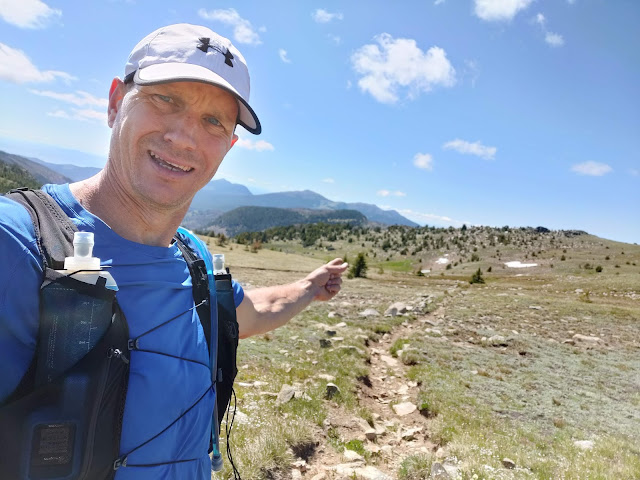 As I descended from Windy through and old burned section I encountered the only other trail traveling humans of my adventure. A couple of hikers with very large packs on their way up. Less than a mile after passing them I had my most significant wildlife encounter of my life so far.
I had turned onto a short flat section in the old burn and as I was following the trail through the charred, white toothpick trees I spotted something much darker than everything else out of the corner of my eye. I turned to look head on at this anomaly and there was a young moose. He wasn't moving and was staring at me, hard. I could see that he had fur on his antlers and my judgment that he was young was based on seeing internet videos of moose that towered over SUVs. This guy was very big, but not that big. I quickly decided that maintaining eye contact with this creature might not be a good idea, as someone had told me they can be dangerous. I turned forward and started walking again, watching him from the corner of my eye. He continued to stare me down, standing still as a statue. Of course I had to take a picture, so as I walked I pulled my phone out and got my camera ready and when my corner eye shot told me I had a good full-on view I stopped and quickly snapped a shot. It was probably all in my head, but I was sure that his expression was communicating to me that I was pushing it now and better kick some rocks if I wanted to live. I stowed my phone as I walked, and bumped the pace back up to a slow run. Once I was fully clear of his view and far enough away to feel safe I thought how great it was to have seen such an amazing creature here in this remote wilderness. I felt blessed for sure. 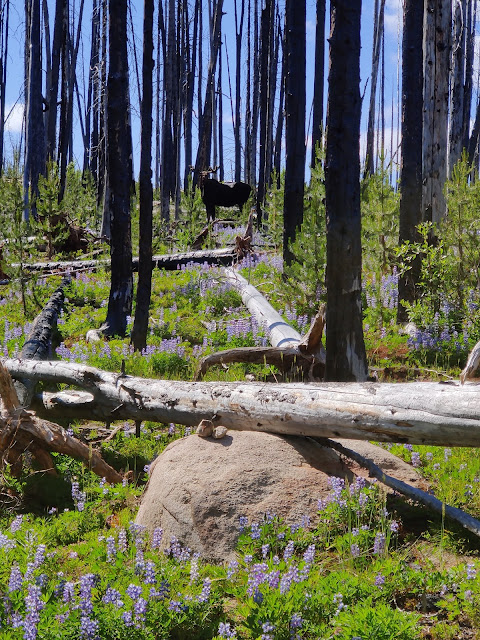 Shortly after Sunny Pass the descent began, diving into much thicker old burn area. The wildflowers were out in force. The trail was overgrown enough in enough places that running seemed a little sketchy, so I ran where I could and walked where I couldn't. I was kind of in the middle of nowhere and pretty far out still, so I really didn't want to have to limp to my truck from here. 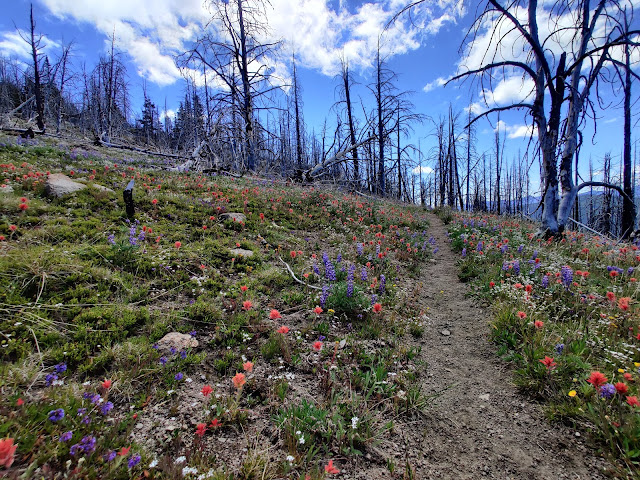 Eventually the trail really cleared up as I descended into the Deer Park area, so I naturally took advantage and started running quickly to make up some time. This ended up not being the best place to start downhill sprinting as I completely missed the turn on to trail #341. A mile and a half too late I thought to myself that it was strange I hadn't seen the turn I knew was supposed to be coming up yet. When I pulled out my phone I found I had shot right past it. It occurred to me that I had been running downhill this hole time so now I would get to power hike back up to the site of my error. Yay, more bonus miles AND vert!
When I got back to the missed turn I could see how this was an easy mistake to make. The trail that would bring me back to the Windy Peak trail was small and didn't appear very heavily used, and it was at a pretty sharp angle to the much more defined trail I had been on.
This connector trail, #341/343, seems to have been long forgotten by any maintenance crews and not very utilized by other bipeds. Going was extremely slow due to heavy overgrowth on the majority of the trail making it impossible to see rocks and roots and other runner destroyers that might lurk beneath the brush. My ankles and lower shins suffered heavy fire for the next seven miles or so. I eventually became numb to the sharp pains of abrasions getting further abraded by more branches and brush. I stopped at the Middle Fork Toats Coulee creek to refill my bladder and bottles and this is where the bugs started. No mosquitoes, but plenty of these small, quick, flies that were on me in a swarm. I didn't realize they were also biting me until much later when the itchy bumps showed up the next day. I am not sure if this initial group followed me for a great while or there were just lots of bugs in this section, but they were with me for a significant bit after this first contact.
After what seemed like a very long time, probably due to the slow pace and the consistent whipping I was receiving, I arrived at the intersection with the Windy Peak trail. At this point I had been out a lot longer than I had expected to be and was quite relieved to know I was on the home stretch.
I descended as quickly as I could while navigating the numerous blow downs again and running through the longer cleared sections. Before I knew it I was back at my truck. My first UPWC adventure was complete! My watch told me I had traveled 34.5 miles and accumulated 8209' of vert. To be honest it felt further than that and like I'd climbed a lot more than that. Later I would realize this entire adventure was at a much higher elevation than I normally ran at and I'm betting that had something to do with that feeling.
This adventure for me was significant in that I overcame my fears and continued on despite my mind's persistent proclamations that I would certainly be eaten by a bear today; I got to make a little checklist of things I need to be better at on longer adventures, namely backup navigation methods; and I became aware of some unique, beautiful country that I hope to explore many more times in the future. This route was amazing and challenging and I thank the Ultra Pedestrian Wilderness Challenge for scouting and sharing it!
Caltopo of planned route: https://caltopo.com/m/HKL7
Strava of my effort, with bonus miles: https://www.strava.com/activities/3817003246 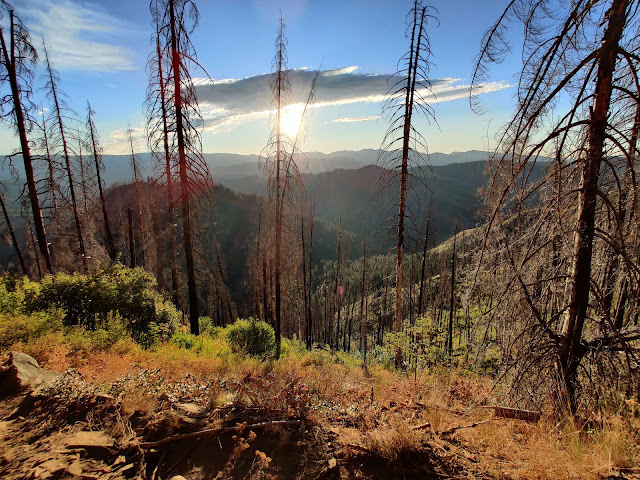 UPWC - Big Jim and The Chiwaukum

Decided on a Friday night that on I needed a big adventure on Saturday. I had been thinking about it for a few days, thinking I needed to get back on the horse after being bucked two Saturdays before during an attempt to traverse the entire Icicle Ridge Trail. That's a long story, but the short and simple of it is I made some bad decisions about water capacity assuming I'd make progress easier and faster than I did on long abandoned trails. Eventually I came to an impassable point in the trail a mile from my water resupply and had to backtrack to an alternate exit very thirsty and a little scraped and bruised from falling a few times on a sketchy hillside. It was a day filled with invaluable lessons for a very inexperienced adventurer like myself. I got a little hysterical in the dehydration and danger, so it took a heavy toll on my confidence. I signed up for the Big Jim and The Chiwaukum route on Ultrasignup and immediately started doubting my ability to complete it. It was p